This in the NYT — H/T to Troy Camplin

In a paper from a few years ago I had a section in a chapter in Hayek and Behavioral Economics that deals with this notion, a curtain-raiser to a more detailed examination.

As already indicated the other component to thinking about complexity resides in the realm of epistemology. Epistemology in the Plato-Descartes tradition besides being highly individualistic, i.e. individualistic (or internal) in the sense that knowledge relies solely upon the operation of mental states without any appeal to external considerations – is primarily concerned with justification. It therefore has a distinctly positive concern. Ignorance, for want of a better term, by contrast does not play a leading role in epistemology.

The sort of ignorance we are concerned with here is “inevitable ignorance” (Rescher, 2009, p. 2) – the idea marking what we cannot know as opposed to “culpable ignorance” what we don’t know or what we should know but don’t, or as others term it “deliberate or inadvertent neglect, secrecy or suppression, unquestioned tradition (or avoidable) cultural political selectivity” (Proctor, 2008). But neither are we concerned with insolubilia (Rescher, 2009, p. 11). Preeminent examples of insolubilia typically come from the realm of theology, a domain that cannot be considered a proper object of epistemological study.[i]

When Hayek delivered his Nobel Prize Lecture entitled “The Pretence of Knowledge” he might well have had Socrates’ words in the deepest recesses of his mind. Plato in the Apology (29a) has Socrates say:

For this fear of death is indeed the pretence of wisdom, and not real wisdom, being the appearance of knowing the unknown; since no one knows whether death, which they in their fear apprehend to be the greatest evil, may not be the greatest good. Is there not here conceit of knowledge, which is a disgraceful sort of ignorance?

Despite Rumsfeld’s awkward phrasing, Haack saw that it brought to light a serious epistemological point – the idea of the “unknown unknowns.” Haack elucidates what she has previously termed as the “Rumsfeld Problem” (Haack, 2008) as follows.

To assess how good the evidence was that, e.g., Saddam Hussein had weapons of mass destruction, U.S. intelligence services needed to know not only where the available evidence [the “knowns”] pointed, and how secure it was, but also how comprehensive it was; and to do that, they needed to know what relevant evidence there might be that they didn’t have [the “unknowns”]. Unfortunately, though they knew what some of the relevant evidence was that they needed but didn’t have [the “known unknowns”], they didn’t realize that other evidence, evidence they also didn’t have, was also relevant [the “unknown unknowns”]. (Haack, 2011).

At first blush does it make any sense to posit the idea of “unknown unknowns”? Were they to be identified as such then surely we’d know something. The idea of “unknown unknowns” is a neglected part of epistemology and cuts across the epistemology of complexity in all its guises including the philosophy of sociality and the philosophy of mind. Hayek (1967, pp. 22-42) certainly thought that epistemological modesty was vital: 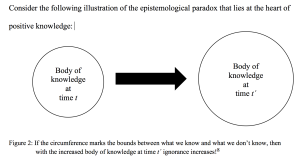 The perpetual limiting condition is what (to borrow a phrase from Colin McGinn, 1989) I’m terming as cognitive closure. The notion of cognitive closure, though unfashionable and controversial, is hardly an eccentric position; it has a long-standing provenance and can be found in different guises in recent philosophy of mind (McGinn, 1989 and Stoljar, 2006). Despite the aforementioned paradox, neither Hayek nor Simon are saying that scientific or social “progress” is not possible. What they are saying is that one has to be very careful about characterizing progress – progress is not a straightforward linear phenomenon – and that epistemic modesty should be an epistemic virtue.

[i] Take the concept of God: the concept does not achieve enough clarity and distinctness to be discussable. When we cite the divine attributes — omniscience, omnipotence, and so on — we don’t have the least purchase on these ideas which generate paradoxes almost immediately.