We live in a time when being dumb is reward and being smart is counter-culture.

If one makes a claim for harbouring a disinterested approach to truth, then one needs to explore ideas beyond one’s ideological reservation, most of which have long since become barren and infertile through infelicitous activity. It used to be that being liberal was punkishly socially transgressive, pointing out social incoherencies in a given culture and offering genuine (not gestural) remedies. Now so-called “liberals” are anything but — they are REGRESSIVE and ILLIBERAL driven by the inherent superficiality and attendant divisiveness of identity politics.

The Rubin Report is not a vehicle for Dave Rubin — as with many of us that used to comprise a broad centre, he is concerned by the loss of liberal values (intellectual diversity). We are now caught between a rock and a hard place. On the one hand we have the “regressive” Left and THEIR unwanted newly-born defective baby whose name cannot be mentioned. The Right fills the role of the absent father, having not adequately taken on their epistemic responsibility. To rework John Kennedy Toole’s phrase from A Confederacy of Dunces the unwanted baby is the product of a particularly weak conception on the part of the father whose sperm was emitted in a rather offhand manner — hence they are deemed, in internet parlance, as “cucks.” These two parents frame the shit-storm we find ourselves in.

Don’t be fooled by the word “chat” — The Ruben Report is not some ubiquitous showbiz chat show where someone is on for eight minutes plugging the obligatory film or book, wrapped up in unchallenging soft sparkling repartee and “well-rehearsed spontaneity”. Of course the guests do have books and films but the discussion is genuinely conversational, wide-ranging and most importantly substantive. The guests do not agree on everything — that’s the point. The common cause, though, is the key liberal value of free speech which is conspicuously absent from the parti pris reservation style of thinking that deeply infects mainstream media and their complicitous partners — the political establishment (Right and Left), a whole array of associated vested interests, assisted by the cowardly and disingenuous sniping from the Platonic rationalist generals and their minions on academic reservations.

Now more than ever when we are drowning in a sea of disinformation, the only thing we have (or we’ve ever had) to test the veracity of ideas, is free speech — however unpalatable some of it might be. It’s an epistemic virtue that underpins civil society and Enlightenment values.

Dave, along with Gad Saad and others, is fighting the good fight for liberal values. If you have any regard for truth, you need to expose yourself to a whole range of perspectives, and not get hung up on the branding of demonization. Along with Dave’s programme check out the following channels for thoughtful and nuanced discussion that you won’t get on TV or the traditional press. Of course, it will require putting some time in and not lazily regurgitating (virtue-signaling) some empirically faulty headline. As per Dave’s graphic below, I find that the most interesting people are those that break the stereotype, are independent thinkers, cosmopolitan but not globalist, liberal in experience and high Tory as to what constitutes knowledge, an idea wonderfully articulated by Nassim Nicholas Taleb. 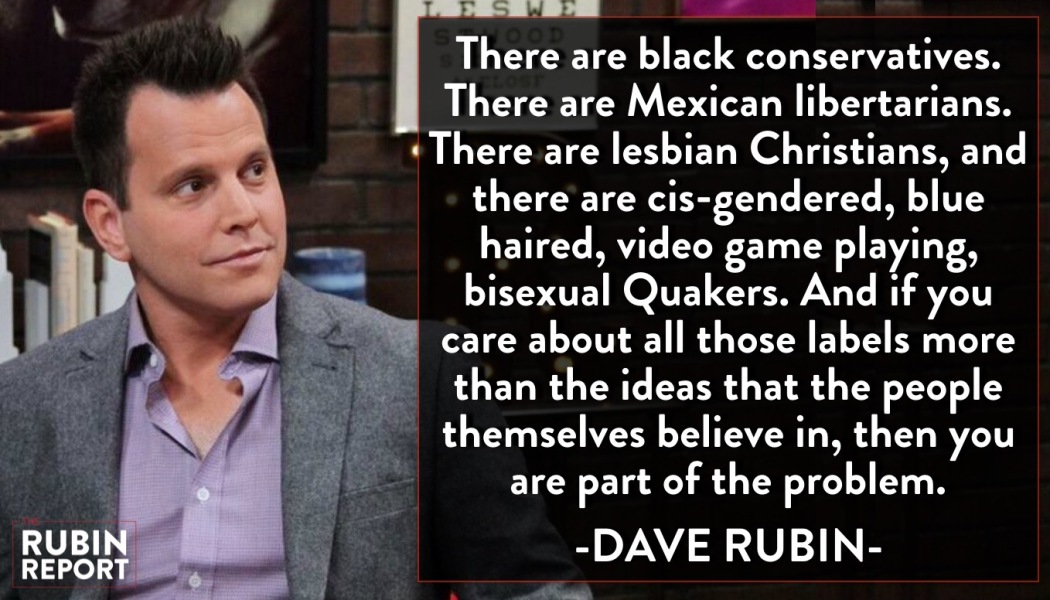